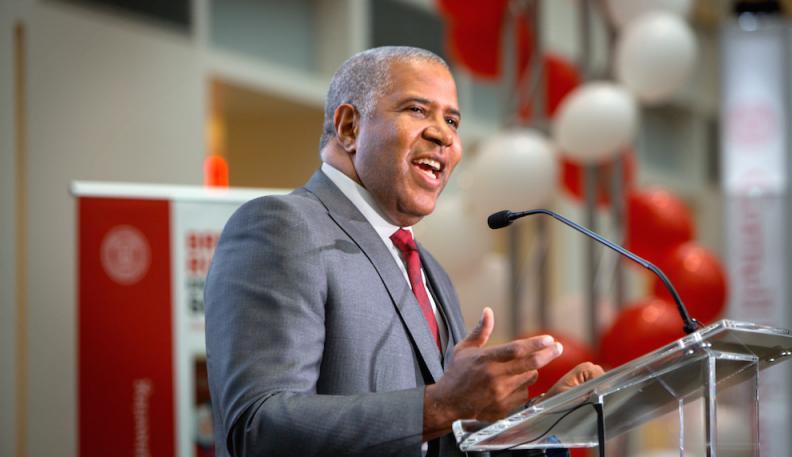 Robert F. Smith ‘85 is an engineer, innovator, investor and active philanthropist. He is also the Founder, Chairman and CEO of Vista Equity Partners a leading global investment firm that specializes in enterprise software, data, and technology-enabled companies. He earned a bachelor’s degree in chemical engineering from Cornell’s College of Engineering and has continued to support the university throughout his career. During a fireside chat with Lance R. Collins, the former Joseph Silbert Dean of Engineering, Smith recalled fondly that, “Cornell was such a wonderful experience in a fundamental time in my life,” and added, “Cornell believes in rigor. We bring a different degree of rigor.” His experience as an engineering student helped him to learn the work ethic and competitive drive he would need to succeed. These Cornellian characteristics remain with him today. Smith further echoed the importance of these characteristics stating, “I would choose a Cornell engineer over any other student.” As an undergraduate, he explained his studies taught him “the importance of sticking with problems and thinking them through.”

A member of the Cornell Engineering College Council, Smith was the 2020 recipient of Cornell Engineering’s Distinguished Alumni Award, which recognizes alumni who have broken traditional boundaries to transform society, and whose professional accomplishments bring distinction to the college. He was also one of three Cornellians recognized by TIME Magazine’s list of the 100 “Most Influential People” of 2020. In 2017, he was named Cornell’s Entrepreneur of the Year, an award that honors a Cornellian who exemplifies entrepreneurial achievement, community service and high ethical standards. In May 2022, Smith was also honored to, once again, accept the Distinguished Alumni Award from Cornell Engineering. Smith is also a member of the Cornell Tech Council, which serves as the primary governance group for Cornell Tech and a subsidiary body of the Cornell University Board of Trustees.

Individual contributions from both Robert F. Smith and the Fund II Foundation, of which Smith is the founding director and President, resulted in a combined gift of $50 million that was donated to Cornell Engineering’s School of Chemical and Biomolecular Engineering. The donation would support chemical and biomolecular engineering, as well as technology scholarships for African-American and female students at Cornell University’s College of Engineering. The late President of Cornell University, Elizabeth Garrett, called Smith’s gift “extraordinary.” She noted this gift would allow the university to address the poor representation of women and minority students in engineering programs.

Through undergraduate scholarships, graduate fellowships; and diversity initiatives, Smith’s commitment to the school has allowed for the creation of additional opportunities for faculty and student learning. Research projects, programs engaging high school students in STEM fields and programs to foster community connection among students and alumni are a few of the dynamic Smith initiatives. Helping to prepare the next generation of critical thinkers who will address current global challenges, Smith initiatives that have and will continue to make an impact include:

According to Smith, the success he found after graduating with a degree from Cornell’s engineering program helped inspire the gift. His hope was that the gift would make the same experience available to a more diverse group of students. He stated, “My direct intention here is to work directly with Cornell Tech and Cornell Engineering, in New York City and in Ithaca, to create direct on-ramps for African-Americans and young women to enter tech so that they can help lead us into the fourth industrial revolution.” To honor Smith for the generous gift, the School was later renamed “Robert Frederick Smith School of Chemical and Biomolecular Engineering,” and the Robert Frederick Smith Tech Scholars Program was created, spanning Cornell Engineering and Cornell Tech.

In April 2022, Smith made another significant donation to Cornell University’s Robert Frederick Smith School of Chemical and Biomolecular Engineering. After accepting his Distinguished Alumni Award, Smith announced a new gift of $15 million for engineering student aid. Like many of his most recent donations to other organizations and universities, the focus of the gift was to financially assist undergraduate students at the university from urban high schools, as well as graduate students at Cornell who received their undergraduate degrees from Historically Black Colleges and Universities.

“I am grateful to Robert for sharing our commitment to welcoming the most talented and promising students, regardless of background or ability to pay, and helping us ensure that cost never becomes an obstacle to a Cornell education,” stated Cornell President Martha E. Pollack of the gift. The donation is intended to help establish an undergraduate scholarship fund and graduate student fellowship fund, both in Smith’s name. At least seven undergraduate students a year will receive the support of up to $45,000 in grants, while the graduate fellowship fund will support approximately 12 master’s students and five doctoral students. The Robert F. Smith Student Success Fund, which will provide financial support to students interested in participating in conferences, professional development training and mentoring or other learning opportunities, will also be established thanks to Smith’s gift.

“My goal has always been to lift up and provide opportunity for those who have historically faced barriers to success,” said Smith when announcing the gift. “My hope is that these funds will elevate more students and afford them the opportunity to attend my alma mater and pursue careers in STEM, as well as continue to support the diverse pipeline of extraordinary talent that Cornell produces.”

After graduating from Cornell University, Smith began his career at Goodyear Tire and Rubber, followed by Kraft General Foods. He left Kraft General Foods to pursue his MBA from Columbia University, where Smith serves on the Board of Overseers.Since his graduation from Columbia, he has made several gifts to help expand the school and provide funding to students from often underserved populations. In 2017, he made a $15 million donation to help with the university’s expansion into the Manhattanville neighborhood of West Harlem. In January 2022, Smith, donated $10 million for The Robert F. Smith ’94 Scholarship Fund, which will support approximately 200 MBA students from HBCUs for years to come.

Following his tenure at Kraft, he worked at Goldman Sachs, where he specialized in investing in technology companies. At Goldman Sachs, Smith had a key role in mergers and acquisitions including Apple, Texas Instruments and eBay. In 2000, Smith left Goldman Sachs to start his own investment firm, Vista. Smith’s professional recognition include being named among Forbes’ list of the 100 Greatest Living Business Minds, an inductee into the Texas Business Hall of Fame and a member of the Bloomberg 50 in 2019.

Smith has dedicated much of his life to philanthropy. He helps to support the mission of the Fund II Foundation, which provides grants to public charities to promote cultural, artistic, human rights, environmental, and other public-minded efforts. In 2017 he was the first African-American to sign the Giving Pledge, pledging to donate at least half of his wealth during his lifetime. Smith also gifted $20 million, the largest by an individual donor at the time, to the National museum of African-American History and Culture. With the Museum, the Robert F. Smith Internship Program and Fellowship was established to provide opportunities for underprivileged individuals pursuing careers in the cultural sector. The gift also funded the Robert F. Smith Explore Your Family History Center and Center for Digitized and Curation of African American History.

Smith is a recipient of UNCF’s President’s Award, the Congressional Black Caucus Foundation Chair’s Award and Ripple of Hope Award from Robert F. Kennedy Human Rights. He received an honorary degree at the Morehouse College 135th Annual Commencement Ceremony, where Smith also announced his commitment to eliminate the student loan debt for the entire 2019 graduating class. He also expanded his gift to include the loans that were taken out by the students' parents. In addition to being a featured commencement speaker, Smith has been invited to speak at a variety of industry events and conferences. He has participated in events for The Economic Club of Washington D.C. and is also a recurring participant of The World Economic Forum Annual Meeting in Davos, Switzerland.

His life-changing gift to the Morehouse College graduates earned worldwide attention and is only one example of Smith’s generosity. In the same year, the Carnegie family of institutions welcomed Smith as a recipient of the Carnegie Medal of Philanthropy. According to the Carnegie family of institutions, his bold philanthropy aligns directly with Carnegie’s vision, and continues to inspire others to give back. In 2020 Smith announced an additional personal donation of $50 million to Student Freedom Initiative to match the original gift provided by the Fund II Foundation. In December of the same year, the National Society of Black Certified Accountants (NSBCPA) announced a major gift from Smith, who pledged $1 million to support NSBCPA’s and Certified Public Accountants virtual CPA exam review program initiative.  He is also a continued proponent of The 2% Solution, which encourages businesses to donate 2% of their profits over the next 10 years to communities that have been systematically held back by the racial wealth gap, and the Southern Communities Initiative, which strives to grow racial equity funding, programming and outcomes in six southern communities that are home to more than half of African Americans within the United States.

When asked about his generosity, Smith said he feels he has a responsibility to give back. “I take that responsibility seriously,” he said, “to bring all of the education and dedication and effort to create in this world, in this economic structure, opportunity that I can then drive into philanthropic fabric to do what I think is the most important thing on this planet, which is to liberate the human spirit.”

In May 2022, Smith announced a new $15 million gift to the College of Engineering, with a focus on assisting undergraduate students who come to Cornell from urban high schools and graduate students who attended historically Black colleges and universities (HBCUs). In addition to the undergraduate scholarship fund and graduate student fellowship fund, the gift will establish the Robert F. Smith Student Success Fund to provide support for student participation in national conferences, professional development training, connections with employers, mentoring programs, and immersive learning opportunities. In announcing the gift, Smith said “My goal has always been to lift up and provide opportunity for those who have historically faced barriers to success. My hope is that these funds will elevate more students and afford them the opportunity to attend my alma mater and pursue careers in STEM, as well as continue to support the diverse pipeline of extraordinary talent that Cornell produces.” 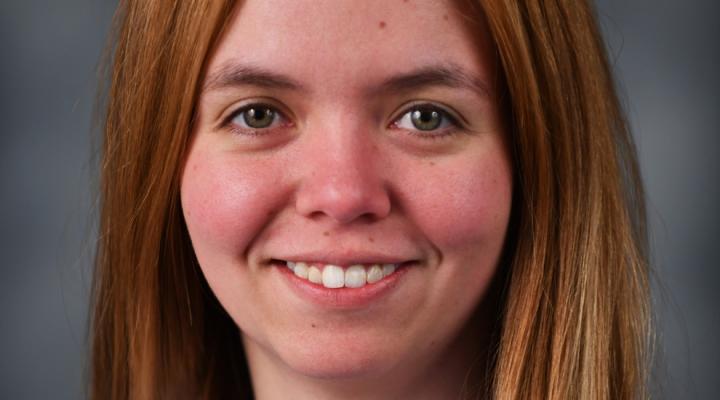 Natalia Lopez-Barbosa: Winner of the best graduate TA award in 2020

Natalia is recognized for her outstanding contribution to teaching and co-developing new lab experiments. As noted in the nomination “...without Natalia’s unflappable dedication and willingness to go... Read more about Natalia Lopez-Barbosa: Winner of the best graduate TA award in 2020 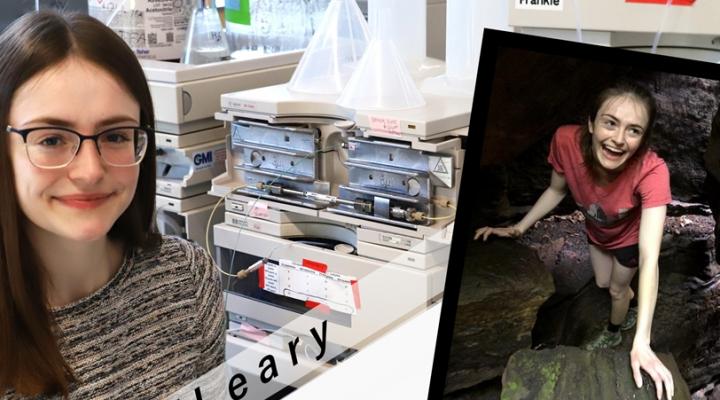 Meghan chose to pursue a Ph.D. in chemical engineering because she wanted an intellectual challenge and an opportunity to positively impact society. She is passionate about piquing girls’ interest in... Read more about Meghan O'Leary: Alabi Lab 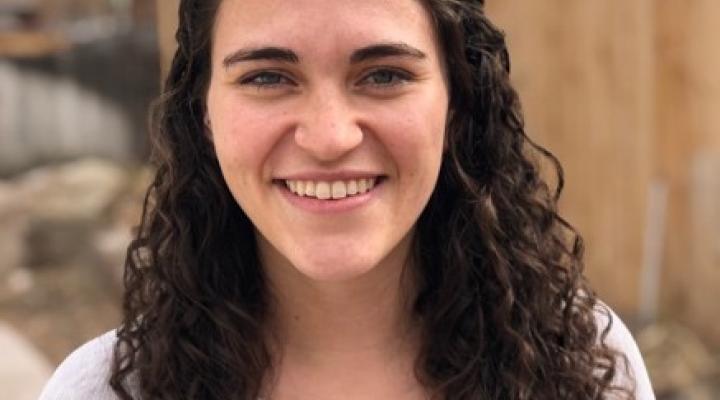